June 1941: The German invasion of the Soviet Union ("Operation Barbarossa"). The initial phase of the war was determined by significant military successes of the Wehrmacht. At that time the Red Army was poorly equipped and unorganized, which was not least due to the fact that large parts of the officer corps had fallen victims of the Stalinist purges of the previous years.

However, it turned out that the Germans had badly underestimated the Soviet resistance. Among other things, the Red Army had advanced heavier tanks (T-34, KV-I/-II), which were superior to the German armored fighting vehicles in every aspect. The operational success of the Wehrmacht was only possible because the new Soviet tanks were not available in large numbers and the lack of radio equipment and therefore coordination lead to limited control of the tanks in operation in comparison to the Wehrmacht.

The backbone of the German Panzertruppe was at that time the PzKpfw II, III and IV and the 38(t), which was taken over from the Czech army. These vehicles had the following armament:

These armaments only offered the possibility of achieving damaging hits on Soviet tanks of the latest design at very short ranges.

At that time the only German gun, which could be used on long distance with prospect of success was the 8.8cm anti-aircraft gun (the famous "Acht-Acht"). But at this time the gun was not available in a battle tank and not even in significant numbers as self-propelled guns.

As Operation Barbarossa progressed it became clear that all existing types of German Panzers were inferior in both armour and armaments to the latest soviet designs. Thus the need arose to design a competitve, massed produced tank.

Thus, among other things the development of the battle tank V "Panther" began. 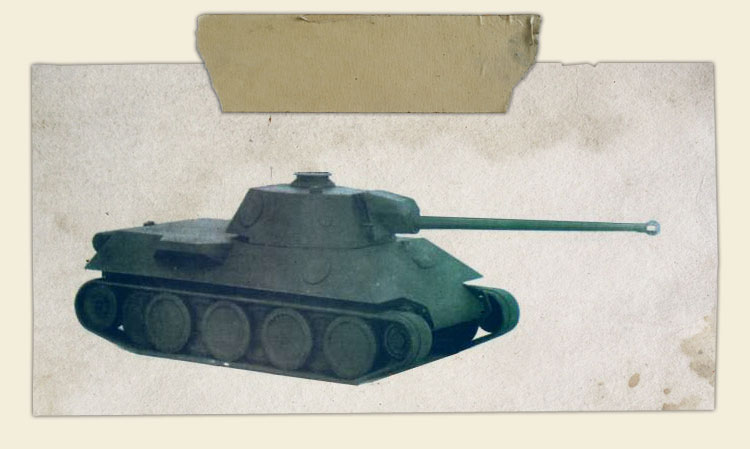 Already in November 1941, Generaloberst  Guderian welcomed the  " Panzerkommission " (Armored Commission) among other things with these demands and priorities of the new MBT:

Since the summer of 1937
vehicles in the 35-40 ton class powered by a 700hp engine had been in development. This was contrary to a prohibition put in place by Truppenamt (In 6), which was issued after the Polish campaign. It was this illicit development which made possible the short term construction of Tigers and Panthers in the summer of 42)²

December 1941:
the companies MAN and Daimler-Benz received the development contract

May 1942:
Following an recommendation from an commission appointed for this purpose Hitler decides for the design of MAN.

8.-14.11.1942
Vehicle demonstration in Berka near Eisenach headed by Speer, Fichtner and Holzhäuser.
Including  a MAN panther and a Daimler-Benz Panther! )²

January 1943:
the first 4 Panther Ausführung D are produced by the company MAN

From August 1943:
Production of Ausführung A. A revised turret mounted on the chassis of the Ausführung D .

1942 to 1943
Panther II (till April 1943 called Panther 2). The Panther II was completely different to the Panther Ausf F; It showed a clearer relationship to the Tiger 2. The development of the Panther II was hired in May / June 1943 (according to Spielberger 4.5.1943). A correlation Panther II and narrow turret is therefore purely fictitious, though in the Internet and among  modelers rather popular.
The G-turret  on the Panther II (the one  at Fort Knox) was added as an afterthought at the Aberdeen Proving Ground. The original hull had no turret.

Clearly, further alterations were carried out within the production series. E.g. the change from binocular gun sight called TZF 12 to the monocular version TZF 12a in November 1943.
Also tanks already in use were outfitted with modifications, such as a handle on the rear turret hatch and the debris guard over the gap behind the gun mantlet.
An overview of the changes is compiled here

A report, dated February 20 1945 identifies technical innovations which were located in the developments.

The times indicated in the first list show when the changes would have been fully developed. The introduction of these changes to the production line would certainly have taken much longer.