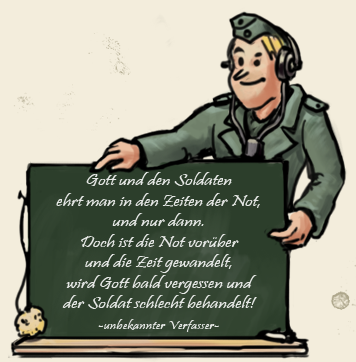 This site is not intended to glorify the Third Reich in any way. The people involved in this site feel no sympathy for, or affiliation to, the ideas and ideals of the Third Reich.  We wish to clearly disassociate ourselves from all the ideas and themes of the Nazis. We do not want, or intend, to deny any war crime committed by either the Wehrmacht or the Waffen SS in any way. However, both the Wehrmacht and the Waffen SS are an integral part of German history and within these organizations were soldiers who discharged their duties, with no care or belief for the Nazis, but only because they had been raised to understand that it was their duty to serve the fatherland. The Fatherland is now a term that is nearly taboo within Germany yet holds high importance in other countries.

Essays and illustrations, both drawn and photographic, that are concerning the Third Reich and showing national markings and/or emblems of the Third Reich are collected and exist on this site only for the purpose of scientific study and for civil education.

With regard to the statements above we refer to paragraphs 86 and 86a of the German Criminal code, (StGB).

This site is dedicated to Edi Eberl’s father, who served in the 25th Panzer Regiment, 7th Panzer Division from 1942 to 1945 on the Eastern Front, and by skill and luck survived active service on the Eastern Front and the captivity that followed.
To this good fortune Edi owes his existence.

News from the Homepage Front

translation of the "the last of their kind" section

The last of their kind - Panther Ausf. G - Saumur